The tooth largest in volume and most complex in root and root canal anatomy, the "6-year molar" is possibly the most treated, least understood, posterior tooth. It is the posterior tooth with the highest endodontic failure rate and unquestionably one of the most important teeth. Three individual roots of the maxillary first molar provide a tripod: the palatal root, which is the longest, and the distalbuccal and mesial-buccal roots, which are about the same length. The palatal root is often curved buccally in its apical third. Of the three canals, it offers the easiest access and has the largest diameter. Its orifice lies well toward the palatal surface and it is sharply angulatcd away from the midline. Crosssectionally it is flat and ribbonlike, requiring close attention to debridement and instrumentation; fortunately there is rarely more than one apical foramen. The distal-buccal root is conical and usually straight. It invariably has a single canal. The mesial-buccal root of the first molar has generated more research, clinical investigation, and pure frustration than has probably any other root in the mouth. Green9 stated that two foramina were present in 14% of mesial-buccal roots of the maxillary first molars studied and two orifices were noted in 36%. Pineda reported that 42% of these roots manifested two canals and two apical foramina. Slowey supported Pineda's conclusions within a few percentage points. Kulild indicated that a second ML canal was contained in the coronal half of 95.2% of the mesial-buccal roots examined. The canals were located with hand instruments (54.2%), bur (31.3%), and microscope (9.6%). Each tooth was sectioned in 1-mm increments and although not all canals reached the apex, this study revealed that 71.1% had two patent canals at the apex. It is the author's opinion that the spaces located beyond true canals were finlike extensions found commonly in the broad buccolingual root of the maxillary first molar. The fact that almost half of these roots bear two canals, whether they join into a single foramen or not, is enough reason always to assume that two canals exist until careful examination proves otherwise. The extra orifice lies centrally somewhere between the mesial-buccal and palatal orifices. Kulild also reported that the mesial-lingual canal orifice averaged 1.82 mm lingual to the mesial-buccal canal orifice. Searching for the extra orifice is aided by using the fiberoptic light and by locating the developmental line between the mesial-buccal and palatal orifices. The second canal within the mesial-buccal root is always smaller than the other canals and, so, is often more difficult to clean and shape. Gaining access to the primary canal within the mesial-buccal root can be made easier by improving the angle of approach. All caries, leaking restorations, and pulpal calcifications must be removed prior to initiating endodontic treatment. After treatment it is mandatory to institute full coverage to ensure against vertical cuspat or crown-root fracture. It is also advisable to place internal metal reinforcement whenever there is a significant loss of coronal tooth structures. (Burns RC, Buchanan LS. Tooth Morphology and Access Openings. Part One: The Art of Endodontics in Pathway of Pulp, 6th Ed. p. 148). 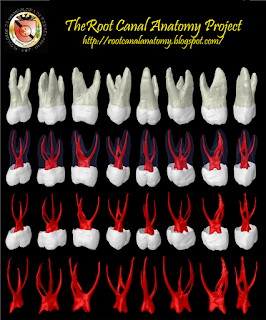