Most commonly birooted, the maxillary first premolar is a transitional tooth between incisor and molar. Loss of the posterior molars subjects the premolars to heavy occlusal loads. Removable appliances increase torque on these frequently clasped teeth, and the additional forces, in concert with deep carious lesions, can induce heavy calcification of the pulp chambers. Early posterior tooth loss often causes rotation, which can complicate the locating of pulp chambers. The canal orifices lie below and slightly central to the cusp tips. The initial opening is in the central fossa and is ovoid in the buccal-palatal dimension. When one orifice has been located, the clinician should look carefully for a developmental groove leading to the opening of another canal. The angulation of the roots may be determined by positioning of the endodontic explorer. Radiographic division of the roots on a routine periapical film often indicates tooth rotation. Divergent roots require less occlusal access extension. Conversely, parallel roots may require removal of tooth structure toward the cusp tips. All caries and leaking restorations must be removed and a suitable temporary restoration placed. Radicular irregularities consist of fused roots with separate canals, fused roots with interconnections or "webbing," fused roots with a common apical foramen, and the unusual but always to be considered three-rooted tooth. In the last situation the buccal orifices are not clearly visible with a mouth mirror. Directional positioning of the endodontic explorer or a small file will identify the anatomy. Cams and Skidmore reported that the incidence of maxillary first premolars with three roots, three canals, and three foramina was 6% of the cases studied. The root is considerably shorter than in the canine, and distal curvature is not uncommon. The apical foramen is usually close to the anatomic apex. Root lengths, if the cusps are intact and used as reference points, are usually the same. The apical portion of the roots often tapers rapidly, ending in extremely narrow and curved root tips. The prevalence of mesial-distal vertical crown or root fracture of the first premolar requires that the clinician remove all restorations at the inception of endodontic therapy and carefully inspect the coronal anatomy with a fiberoptic light. After endodontic treatment, full occlusal coverage is mandatory to ensure against vertical or crown or root fracture (Burns RC, Buchanan LS. Tooth Morphology and Access Openings. Part One: The Art of Endodontics in Pathway of Pulp, 6th Ed. p. 142). 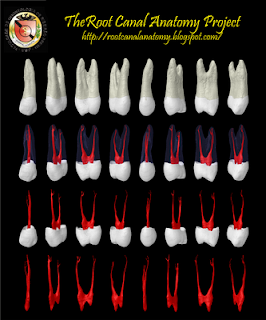