Often considered an enigma to the endodontist, the mandibular first premolar with dual canals dividing at various levels of the root can generate complex mechanical problems. The coronal anatomy consists of a well-developed buccal cusp and a small or almost nonexistent lingual outgrowth of enamel. Access is made slightly buccal to the central groove and is directed in the long axis of the root toward the central cervical area. The ovoid pulp chamber is reached with endcutting fissure burs and long-shanked no. 4 or 6 round burs. The cross section of the cervical pulp chamber is almost round in a single-canal tooth and is ovoid in two-canal teeth. Another investigation reported that "a second or third canal exists in at least 23% of first mandibular bicuspids." The canals may divide almost anywhere down the root. Because of the absence of direct access, cleaning, shaping, and filling of these teeth can be extremely difficult. A study by Vertucci (1978) revealed that the mandibular first premolar had one canal at the apex in 74.0% of the teeth studied, two canals at the apex in 25.5%, and three canals at the apex in the remaining 0.5% (Burns RC, Buchanan LS. Tooth Morphology and Access Openings. Part One: The Art of Endodontics in Pathway of Pulp, 6th Ed. p. 156). 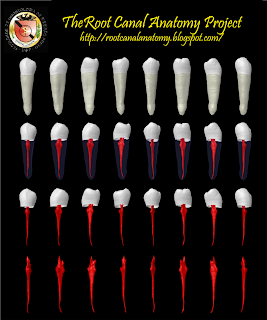