Similar to the first premolar in coronal morphology, the second premolar varies mainly in root form. Its crown is narrower in the buccal-palatal dimension and slightly wider in the mesial-distal. The canal orifice is centrally located but often appears more as a slot than as a single ovoid opening. When the slot-shaped opening appears, the clinician must assume that the tooth has two canals until proved otherwise. The basic outline of the tooth is slightly ovoid but wider from mesial to distal than the outline of the first premolar. All caries and leaking restorations must be removed and replaced with a suitable temporary restoration. Radicular morphology may present two separate canals, two canals anastomosing to a single canal, or two canals with interconnections or "webbing." Accessory and lateral canals may be present, but less often than in incisors. Vertucci and associates stated that 75% of maxillary second premolars in their study had one canal at the apex, 24% had two foramina, and 1% had three foramina. Of the teeth studied, 59.5% had accessory canals. These clinicians also reported that when two canals join into one, the palatal canal frequently exhibits a straight-line access to the apex. They further pointed out that "if, on the direct periapical exposure, a root canal shows a sudden narrowing, or even disappears, it means that at this point the canal divides into two parts, which cither remain separate (type V) or merge (type II) before reaching the apex." The root length of the maxillary second molar is much like that of the first premolar; and apical curvature is not uncommon, particularly with large sinus cavities. After endodontic treatment, full occlusal coverage is mandatory to ensure against vertical cuspal or crown-root fracture (Burns RC, Buchanan LS. Tooth Morphology and Access Openings. Part One: The Art of Endodontics in Pathway of Pulp, 6th Ed. p. 144). 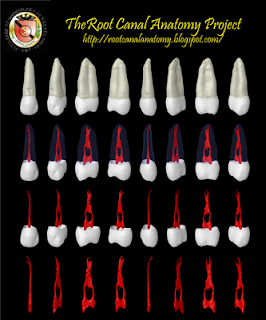