Mandibular molars can have an additional root located lingually (the radix entomolaris) or buccally (the radix paramolaris). The presence of a separate RE in the first mandibular molar is associated with certain ethnic groups. In African populations a maximum frequency of 3% is found, while in Eurasian and Indian populations the frequency is less than 5%. In populations with Mongoloid traits (such as the Chinese, Eskimo and American Indians) reports have noted that the RE occurs with a frequency that ranges from 5% to more than 30%. Because of its high frequency in these populations, the RE is considered to be a normal morphological variant (eumorphic root morphology). In Caucasians the RE is not very common and, with a maximum frequency of 3.4 to 4.2%, is considered to be an unusual or dysmorphic root morphology. The etiology behind the formation of the RE is still unclear. In dysmorphic, supernumerary roots, its formation could be related to external factors during odontogenesis, or to penetrance of an atavistic gene or polygenetic system (atavism is the reappearance of a trait after several generations of absence). In eumorphic roots, racial genetic factors influence themore profound expression of a particular gene that results in the more pronounced phenotypic manifestation. Curzon suggested that the ‘three-rootedmolar’ trait has a high degree of genetic penetrance as its dominance was reflected in the fact that the prevalence of the trait was similar in both pure Eskimo and Eskimo/Caucasian mixes. An RE can be found on the first, second and third mandibular molar, occurring least frequently on the second molar. Some studies report a bilateral occurrence of the RE from50 to 67%. Bolk reported the occurrence of a buccally located addi tional root: the RP. This macrostructure is very rare and occurs less frequently than the RE. The prevalence of RP, as observed by Visser, was found to be 0% for the first mandibular molar, 0.5% for the second and 2% for the third molar. Other studies have, however, reported RP in first mandibular molars. The RE is located distolingually, with its coronal third completely or partially fixed to the distal root. The dimensions of the RE can vary from a short conical extension to a ‘mature’ rootwith normal length and root canal. Inmost cases the pulpal extension is radiographically visible. In general, the RE is smaller than the distobuccal and mesial roots and can be separate from, or partially fused with, the other roots. A classification by Carlsen and Alexandersen describes four different types of RE according to the location of the cervical part of the RE: types A, B, C and AC. Types A and B refer to a distally located cervical part of the RE with two normal and one normal distal root components, respectively. Type C refers to a mesially located cervical part, while type AC refers to a central location, between the distal and mesial root components. This classification allows for the identi fication of separate and nonseparate RE. In the apical two thirds of the RE, a moderate to severe mesially or distally orientated inclination can be present. In addition to this inclination, the root can be straight or curved to the lingual. According to the classification of De Moor et al., based on the curvature of the separate RE variants in bucco-lingual orientation, three types can be identified. Type I refers to a straight root/root canal, while type II refers to an initially curved entrance which continues as a straight root/root canal. Type III refers to an initial curve in the coronal third of the root canal and a second curve beginning in the middle and continuing to the apical third. The RP is located (mesio) buccally. As with the RE, the dimensions of the RP can vary from a ‘mature’ root with a root canal, to a short conical extension. This additional root can be separate or nonseparate. Carlsen and Alexandersen describe two different types: types A and B. Type A refers to an RP in which the cervical part is located on the mesial root complex; type B refers to an RP in which the cervical part is located centrally, between the mesial and distal root complexes.An increased number of cusps is not necessarily related to an increased number of roots; however, an additional root is nearly always associated with an increased number of cusps, and with an increased number of root canals (From Calberson et al. 2007 JOE 33(1):58-63). 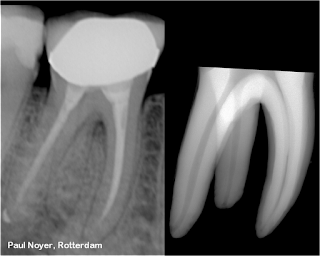 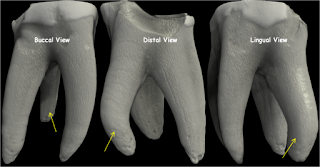 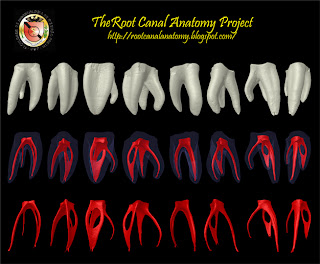