The mesial root of mandibular molars commonly presents 2 main root canals [(mesiobuccal (MB) and mesiolingual (ML)], but the presence of an extra canal in this root, the so-called middle mesial (MM) canal, has been also reported in a percentage frequency ranging from 0.26% to 46.15% . Considering that MM canal lies within a thin developmental groove between the orifices of the MB and ML canals, troughing this groove under high magnification has been suggested in order to identify its presence. However, in a detailed morphological description of the mesial root of mandibular molars presenting MM canal, authors stated that the presence of a thin dentine thickness toward the furcation side of the MM canal at the orifice level (0.80–2.20 mm) would  increase the risk of root perforation after preparation with large-tapered instruments. 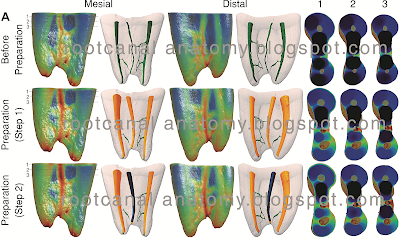 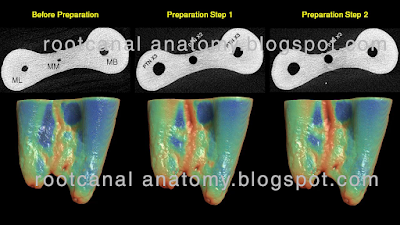