This study evaluated the disinfecting ability of chemomechanical preparation with rotary nickel-titanium instruments, followed by 2 distinct adjunctive procedures in the root canals of extracted mandibular molars by means of a correlative analytical approach.

Twenty-two extracted mandibular molars were selected and anatomically matched between groups on the basis of micro–computed tomographic analysis. In the first phase of the experiment, root canals were contaminated with Enterococcus faecalis and subjected to chemomechanical preparation with BT RaCe instruments and 2.5% NaOCl irrigation. Then either XP-Endo Finisher instrument or passive ultrasonic irrigation was used to supplement disinfection. Micro–computed tomography was used to show whether the percentage of unprepared areas correlated to bacterial counts. In the second phase, the same teeth were contaminated once again, and the adjunctive procedures were used. Samples from the isthmus area of mesial roots and the apical 5-mm fragment of distal roots were obtained by cryopulverization. Samples taken before and after treatment steps in both phases were evaluated by quantitative polymerase chain reaction and statistically analyzed.

In phase 1, preparation in both groups resulted in substantial decrease of bacterial counts (P < .001). The adjunctive approaches led to a further small bacterial reduction, which was significant for XP-Endo Finisher (P < .05). No significant differences were observed between groups for persisting bacterial counts. Correlative analysis revealed no statistically significant relationship between bacterial reduction and the percentage of unprepared areas (P > .05). In phase 2, both methods had significant antibacterial effects in the main canal, but none of them could predictably disinfect the isthmus/recess areas.

Both XP-Endo Finisher and passive ultrasonic irrigation exhibited antibacterial effectiveness, but only the former caused a significant reduction in the bacterial counts after chemomechanical preparation. None of them were effective in predictably disinfecting the isthmus/recess areas. 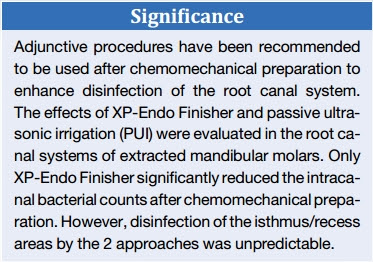 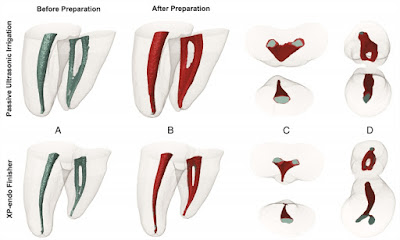