Results
Overall, specimens had 1 root with a main canal that divided into mesiobuccal, distobuccal, and lingual canals at the furcation level. Mean length of the teeth was 22.9 ± 2.06 mm, and the configuration of the pulp chamber was mostly triangle-shaped. Mean distances from the furcation to the apex and cementoenamel junction were 9.14 ± 2.07 and 5.59 ± 2.19 mm, respectively. Apical delta, root canal fusion, and furcation canals were present in 4, 5, and 10 specimens, respectively. No statistical differences were found in the 2-dimensional and 3-dimensional analyses between root canals (P > .05).

Conclusions
Type IX configuration of the root canal system was found in 16 of 105 mandibular premolars with radicular grooves. Most of the specimens had a triangle-shaped pulp chamber. Within this anatomic configuration, complexities of the root canal systems such as the presence of furcation canals, fusion of canals, oval-shaped canals in the apical third, small orifices at the pulp chamber level, and apical delta were also observed. 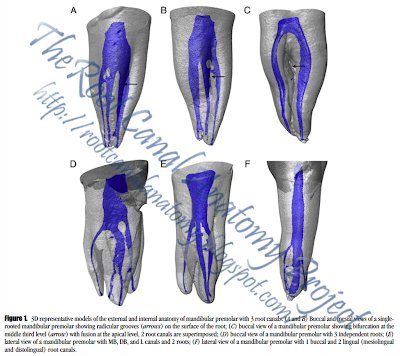 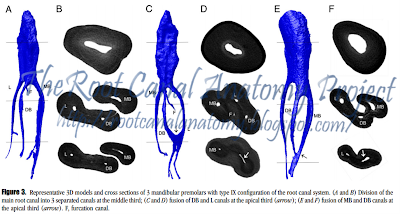 Email ThisBlogThis!Share to TwitterShare to FacebookShare to Pinterest
Labels: Publications